Following on from the successful partnership of LOCK5 and GL Structures on the 2014 Ryder Cup at Gleneagles, LOCK5 were once again appointed the contract of the 2018 Ryder Cup in Golf De National on the outskirts of Paris.

The 2018 Ryder Cup contract focused on the manufacture, supply and installation of various styles of roof linings for two triple-decker structures, one double-decker and four single deck structures. The multiple deck structure sub floors were fitted with flat ceilings, which required a bespoke timber framework. Once this framework has been completed a flat fabric ceiling is stretched across the frame creating a perfectly flat, horizontal, roof lining.

Prior to commencement of the build for this event, the required linings were manufactured in house at our Lining Manufacture department and included not only single use tack off flat ceiling linings for the multiple deck structures but also 30m and 15m reusable linings requested by the client.

Due to this year’s Ryder Cup being held in France, all attending contractors had to ensure they remained compliant with the working regulations stipulated by French Law. This required all personnel working on site to have completed a series of forms detailing each individual’s work status and tax contributions. Once completed these forms had to be kept on site in physical form to allow the French authorities immediate access during the numerous unannounced spot checks and confirm the validity of the individual right to work.

Another French working directive rule which had to be followed was the strict working hours. Accurate time sheets had to be kept and available for immediate inspection. The overall effect was the creation of a set, six-day, maximum working week with no margin to catch up with any lost time through the usual means of extended working hours. It soon became apparent that due to unforeseen site wide issues this would be the constant focus in regard to scheduling for all contractors and required a very fluid working schedule.

Daily meetings to alter and adjust the daily schedule were put in place to ensure every contractor could access each area as quickly as possible and attempt to regain as much lost time as possible. However, due to the nature of interior installation and the requirement to have completed structures, our schedule was one of the worst affected, resulting in several weeks of project overrun. This was a challenge LOCK5 met with a calm, helpful and professional manner and we are proud to say this was noted by other contractors we worked alongside. The original schedule works were planned to last for a six week period; however, due to the challenging delays encountered, LOCK5 had to reschedule crew for a nine week extended build, with an average of 14 personnel on site throughout.

Logistics played a large role in the Ryder Cup 2018 build due to the distance required to move any equipment via a sea crossing which carries a large financial implication, a lot of the pre planning was based around ensuring all equipment and some ‘worst case scenarios’ were accounted for and loaded on the appropriate vehicles to avoid any delays or additional costs.

Once complete, the final fit and finish resulted in completely flat, clean and crisp white roofs with matching leg and header covers in keeping with the manicured green fairways they overlooked. Upon completion Seamless had installed in excess of 12,300sqm of ceiling linings, that equates to almost two full size football pitches in volume, 180 custom leg covers, 9 lined staircases and 360 one off lining covered window headers plus a host of other details.

Once signed off and handed over, event ready, we received praise from the PGA European Tour and our own client, with comments that ‘it was the best lining work they had ever seen within their structures’. 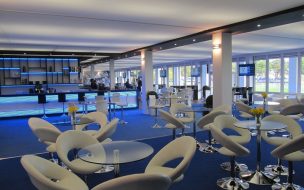 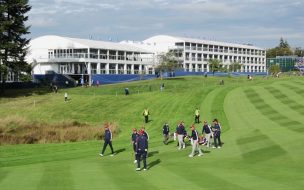